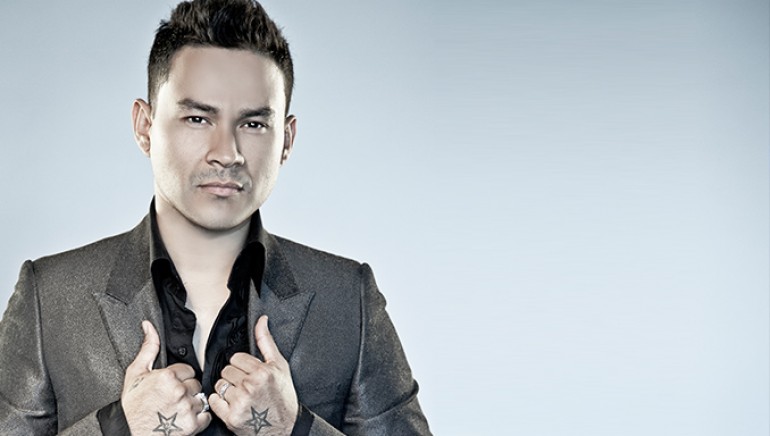 Born in Mexico, he grew up in San Diego and became a freestyle artist under the stage name Frankie Boy in the late 1990s. After his debut freestyle album was shelved, he joined Kumbia Kings. Frankie J’s solo debut album, What’s a Man to Do, was released in 2003, followed by more English and Spanish language albums. He received his first Grammy Award nomination for his album Faith, Hope y Amor in 2013 for Best Latin Pop Album.

Frankie J signed as a solo artist with Columbia Records and released his first album What’s A Man To Do on May 23, 2003. His self-titled first Spanish-language album Frankie J was also released later in the same year. The album’s lead single “Don’t Wanna Try” peaked at #19 on the Billboard Hot 100 Singles Chart, while “Ya No Es Igual” went Top 10 on the World Latin charts. Later that year, he was featured in the Top 10 Billboard Hot 100 hit “Suga Suga” by rapper Baby Bash.

His second album The One was released on March 22, 2005. It was led by the #3 Billboard Hot 100 hit “Obsession (No Es Amor)” featuring rapper Baby Bash, and followed by the Top40 singles “How To Deal” and “More Than Words”. To coincide with the release of “More Than Words”, the album was re-released on the DualDisc format in October. By January 2006, The One was certified platinum by the RIAA for shipping over a million copies. His second Spanish-language album Un Nuevo Dia was released on June 13, 2006, and featured the single “Pensado En Ti”.

Following his departure from Columbia Records, Frankie J released a few singles (“Pictures”, “If You Were My Girlfriend”, “Crush”) between 2008 and 2011, as well as starting his own label, Soulsick Records. He has also written songs for other artists, most recently the number 2 hit song “Take a Chance on Me” in the United Kingdom for boyband JLS.

He released his fourth English-language studio album Courage on December 7, 2011. The lead single “How Beautiful You Are” was released to digital retailers on October 24, 2011. The music video was directed by Mike Ho and premiered on YouTube on September 11, 2011. The video for the album’s second single “And I Had You There” premiered on Frankie’s YouTube channel on November 26, 2011. Frankie J and Baby Bash shot a video for the album’s third single “That’s Wussup” in December 2011 in San Diego, California. The video premiered on January 8, 2012.

On July 12, 2012, it was announced that Frankie J will join Jennifer Lopez and Enrique Iglesias on their joint North America tour, serving as a special guest, replacing Wisin & Yandel who were initially the opening act.

In 2011 he signed with Universal Music and began work on a new Spanish-language album. He released two digital singles (“Ay, Ay, Ay” and “Tienes Que Creer En Mi”/”Take a Chance on Me”) in late 2012.

In 2013, he released his new album, Faith, Hope y Amor on May 28, 2013. The album has been nominated for the 56th annual Grammy Award under the category of Best Latin Pop Album. It was preceded by the release of the singles “No Te Quiero Ver Con Él” and “Beautiful” (featuring Pitbull). “Impossible” was also released as a single.

On November 26, 2015, he premiered the single “Breakin'”,[18] with a music video (in English and Spanglish) premiering on December 14.[19] The digital single was released on December 25, 2015. Four additional singles — “Let the Music Take Control”, “I Promise You”, “Riches in Heaven”, and “Body Rock” — followed in 2016. He announced his next album would be titled More Than the Music. Another single “Not So Dangerous” was released on December 25, 2016.

In March 2017, he scored a radio hit with “Si Una Vez (If I Once)” which was a collaboration with Play-N-Skillz, Wisin, and Leslie Grace. In June, he collaborated with Baby Bash for a new single titled “Vamonos.” The following month in July, he released a new single “Lowrider” with Baby Bash, C Kan, Ozomatli & Kid Frost.

On July 27th, he released his new studio album titled Eleven through his own label Soulsick Musick Inc.