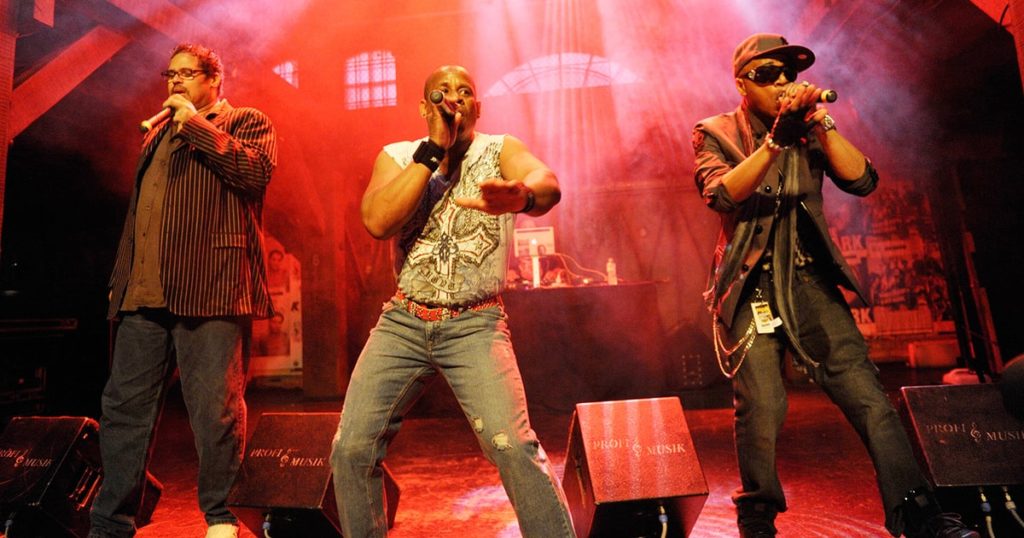 The Sugarhill Gang is an American hip hop group, known mostly for their 1979 hit “Rapper’s Delight,” the first rap single to become a Top 40 hit on the Billboard Hot 100.

The members, all from Englewood, New Jersey, consisted of Michael “Wonder Mike” Wright, Henry “Big Bank Hank” Jackson, and Guy “Master Gee” O’Brien. The three were assembled into a group by producer Sylvia Robinson, who founded Sugar Hill Records with her husband, record producer Joe Robinson. The group and the record company are named after the Sugar Hill, Harlem, neighborhood.

The Sugarhill Gang never had another US hit, though it had a slew of European hits, such as “Apache”, “8th Wonder” (which was performed on the American music show Soul Train in 1981), “Rapper’s Reprise (Jam Jam)”, and “Showdown” (with the Furious Five). In 1999, the trio reunited and recorded Jump on It! a hip hop children’s album.

Following the departure of Wonder Mike and Hendogg from Sugarhill Records in 2005, the original members of the Sugarhill Gang (sans Hank) have performed as the Original Sugar and as Rapper’s Delight Featuring Wonder Mike and Master Gee, largely due to a string of legal cases against them regarding the use of the name ‘Sugarhill Gang’

In 2016, the remaining living members of the original Sugarhill Gang, including Wonder Mike, Hendogg and Master Gee embarked on their first world tour in over a decade under the name The Sugarhill Gang. They performed as the Sugarhill Gang for the Art of Rap festival tour in 2016. They played at V Festival in Hylands Park and Weston Park in the UK as part of their world tour in 2016. On November 27, 2016 they played in Hong Kong at the Clockenflap Festival. On August 5 2017 they headlined the Depot in the Park Festival (Cardiff Wales).