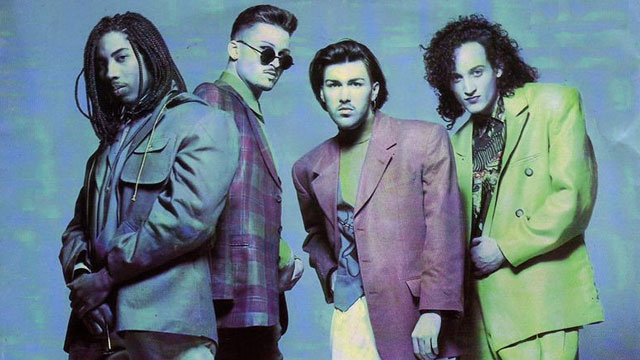 Color Me Badd is an American contemporary R&B group that was formed in Oklahoma City, Oklahoma. The original members of the group were lead singer Bryan Abrams (born November 16, 1969), second tenor Mark Calderon (born September 27, 1970), second tenor Sam Watters (born July 23, 1970) and baritone Kevin Thornton (born June 17, 1969). They formed in 1985 and broke up in 1998 before reuniting in 2010, with various lineups since. As of 2016, they operate as a trio with Abrams, Calderon and Adam Emil.

Best known for their singles “I Wanna Sex You Up”, “I Adore Mi Amor” and “All 4 Love”, the group has sold over 12 million records worldwide, had three number 1 hit singles, nine Top 40 hits and a triple-platinum album. They were nominated for two Grammy Awards, won two Soul Train Music Awards and one American Music Award, and were nominated for five others. Their songs have been featured in movies and on television programs including New Jack City, Mo’ Money, No Strings Attached and Glee. They made a cameo appearance as themselves on a 1992 episode of Beverly Hills, 90210.

Along with Boyz II Men, Hi-Five and All-4-One, Color Me Badd were considered the leaders of a resurgence of post-doo-wop harmony group singing in the early 1990s. Color Me Badd invented the term “hip-hop doo-wop” to describe its sound, which combines four-part pop-soul harmonies with a hip-hop influence. In the 1990s, they were known for wearing bright-colored suits and for their choreography, as well as for being a racially diverse group, which was rare at the time. Calderon is Mexican-American, Abrams is Caucasian and Native American, Watters is Caucasian and Thornton is African-American. The group was inducted into the Oklahoma Music Hall of Fame in 2000.

Color Me Badd has had a lasting influence on R&B music. The Justin Timberlake and Andy Samberg Saturday Night Live Digital Short “Dick in a Box” which debuted on December 16, 2006, is a parody of early ’90s R&B, and is considered a spoof of the style of Color Me Badd in particular. “I Wanna Sex You Up” was performed by cast members on an episode of the first season of Glee in 2009. The music video for “I Wanna Sex You Up” was on an episode of Beavis and Butthead on MTV. The song has appeared in numerous films and television shows, including You Don’t Mess with the Zohan and No Strings Attached. On a November 2015 episode of Jimmy Kimmel Live! Color Me Badd’s Abrams, Calderon and Watters joined with country singer Brad Paisley in a performance of “I Wanna Sex You Up” for Kimmel’s “Mash Up Monday” series. The artists were renamed Color Me Bradd for the occasion.