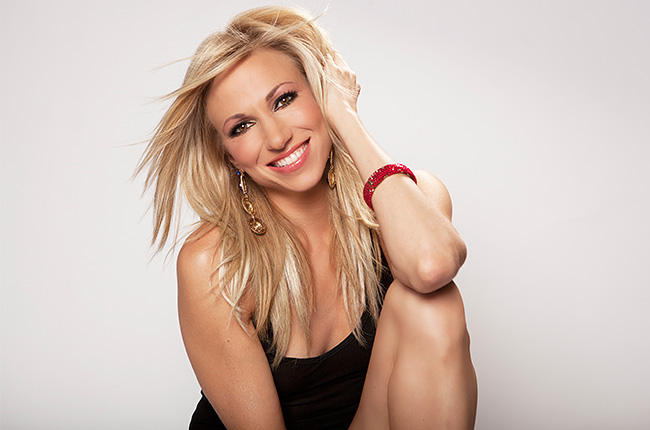 Deborah Ann “Debbie” Gibson is an American singer-songwriter, record producer and actress. Gibson released her debut album Out of the Blue in 1987, which spawned several international hits, later being certified triple Platinum by the RIAA. One of those singles, “Foolish Beat”, made Gibson the youngest female artist to write, produce and perform a Billboard Hot 100 number-one single. Her double-platinum second album Electric Youth (1989), gave Gibson another U.S. number-one hit with “Lost in Your Eyes”. Gibson is the sole songwriter on all of her singles to reach the Top 20 of the Hot 100 charts. She was recognized by ASCAP as Songwriter of the Year, along with Bruce Springsteen, in 1989. She continued to record and release music throughout the 1990s and 2000s. In 2006, Gibson reached No. 24 on the U.S. adult contemporary chart with “Say Goodbye”, a duet with Jordan Knight and in 2017 achieved her highest-charting hit in more than 25 years in her duet with Sir Ivan, ‘I Am Peaceman’.

In addition to music, she has gone on to starring roles on Broadway and touring musicals including playing Eponine in Les Misérables and Sandy in Grease, as well as independent film and television work.
After years of writing and producing her own material, Gibson finally found her demo in the hands of a radio personality who eventually shared it with an executive at Atlantic Records. Based solely on Gibson’s original song, “Only in My Dreams”, she was signed to a development deal and began a promotional tour of club venues throughout the United States.

Gibson spent much of 1986 and the beginning of 1987 building her songwriting catalog while continuing to play club dates. Continuing her promotional tour, Gibson also continued attending classes at Calhoun High School in Merrick, New York, where she would later graduate as an honor student. Diane Gibson, Debbie’s mother and manager, accompanied her daughter on many of these track dates. “We played dance clubs, straight clubs and gay clubs”, Diane has said.

The promotional pressing of “Only in My Dreams” landed the song within the Billboard Hot 100. Atlantic Records signed Gibson to a recording contract and thus began the process of completing what would be the first record.

Gibson, along with producer Fred Zarr, wrote, recorded and produced her first album Out of the Blue in only 4 weeks. Now having something to market, “Only in My Dreams” was selected as Debbie’s first single. This time, “Dreams” found traction on Top 40 radio and reached a peak of No. 4 on the Hot 100 chart.

Following the success of “Dreams”, “Shake Your Love” was released as the follow-up single and reached the Billboard Top 5. The “Shake Your Love” video was choreographed by Paula Abdul and was the first time MTV had visited Debbie on a video shoot.

In 1987, while performing around the United States at nightclub venues, Gibson was recording what would become her debut album, Out of the Blue. It was recorded in four weeks. Four singles from the album reached the Top 5 of the Hot 100 chart: “Only in My Dreams”, “Shake Your Love”, “Out of the Blue”, and the number-one hit “Foolish Beat”, followed by “Staying Together”, which performed more modestly, reaching No. 22. “Foolish Beat” set a record for Gibson, making her (at 17) the youngest artist ever to write, produce, and perform a Billboard number-one single, as entered in the 1988 Guinness Book of World Records, and she remains the youngest female artist to do so. Out of the Blue was established as a hit album and she had success in the UK and southeast Asia, filling stadiums with her Out of the Blue tour. By the end of 1988, Out of the Blue had gone triple platinum.

The Out of the Blue music video compilation was certified platinum by the RIAA; the concert tour video was certified 2x platinum. In October 1988, Gibson sang the national anthem for Game 1 of the Major League Baseball World Series.

Electric Youth was released in early 1989, and spent five weeks at No. 1 on the Top 200 Album chart. The first single released, “Lost in Your Eyes”, was No. 1 on the Hot 100 for three weeks, garnering her another achievement as the first female to have both an album and single simultaneously at No. 1. (She shared the 1989 ASCAP Songwriter of the Year Award with Bruce Springsteen.) Subsequent singles from the album were “Electric Youth” (No. 11), “No More Rhyme” (No. 17), and “We Could Be Together” (No. 71). The Electric Youth album was certified 2x platinum by the RIAA. The successful Electric Youth world tour and Live Around the World VHS (2x platinum) followed. In 1988, Debbie sang “Don’t Flirt with Me”.