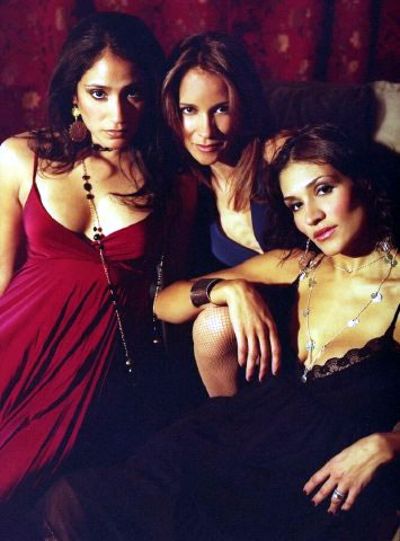 The Cover Girls is a New York City-based freestyle girl group that achieved most of its chart success in the late 1980s and early 1990s. Among the group’s best-known songs are “Show Me”, “Because of You”, “My Heart Skips a Beat”, “We Can’t Go Wrong”, “Funk Boutique” and “Wishing on a Star”.

The Cover Girls released their first album, Show Me, in late 1986. Five singles were released from this album, including the Top 40 Billboard Hot 100 hits “Because of You” and “Promise Me”. The title track of the album was released as a 12-inch single prior to the album’s release and was a Top 5 hit on the US dance chart. Sunshine Wright left after the release of the album and its second single “Spring Love”, in late 1987, and was quickly replaced by Margo Urban, with whom the group released three more singles off the album. In 1988, the group recorded the song “Better Late Than Never” for the Coming To America film soundtrack, and it was released as a single.

The group’s second album, We Can’t Go Wrong, was released in 1989 and included the song “My Heart Skips a Beat” (Pop Top 40, Dance Top 5) as well as the title track, which was the group’s first Top 10 pop hit in early 1990, peaking at #8. The Cover Girls performed “My Heart Skips a Beat” and “We Can’t Go Wrong” on the series finale[2][3] of American Bandstand in October 1989. “All That Glitters Isn’t Gold” was the third single released from the We Can’t Go Wrong album. Shortly after its release Sabater left the group to pursue a solo career, and was replaced on lead vocals by Evelyn Escalera.

The first song recorded with this line-up was “Don’t Stop Now”,[4] released for the compilation album Music Speaks Louder Than Words, which was a joint collaboration between American and USSR songwriters. The song’s music is a cover of Russian artist Viktor Reznikov’s 1988 song “Domovoy”, with new English lyrics written by Todd Cerney and Harold Payne. The song was released as a single in 1990 with “Funk Boutique” originally as the B-Side.[5] “Don’t Stop Now” is credited for getting the Cover Girls signed to Epic Records. In 1990, the Cover Girls recorded the song “New York City Christmas” with Escalera on lead vocals. The song has appeared on several Christmas compilations. In 1990 “Funk Boutique” began to be played at radio and in 1991 a single including remixes of the song was then released with “Don’t Stop Now” as the B-Side. After the release of this single, Margo Urban left the group and was replaced by Michelle Valentine.

The group’s third studio album, Here It Is, released in 1992, features for the first time two lead singers, Escalera and Valentine, and produced the group’s most recent hit, a cover version of the Rose Royce 1978 song “Wishing on a Star”. The Cover Girls’ version of this song became its second Top 10 pop hit when it peaked at #9 in the summer of 1992. The song also reached the Top 40 of the UK Singles Chart that same year. Followed by the single “Thank You”, with Valentine and Escalera sharing lead vocals. A Spanish Version of the song “Wishing On A Star” was recorded as the B-Side to “Thank You”, with Escalera and Valentine both contributing lead vocals on this version. Shortly after the release of “Thank You”, Jackson left the group. Escalera & Valentine continued performing as a duo. “If You Want My Love (here it is)” was the final single from the album “Here It Is”.

In 1993, Evelyn Escalera recorded vocals on a promotional single entitled “Can You Feel It” by Fish released on Cupid Records.

In 1994, the group contributed the new song “You Better Change” to the soundtrack of the film I Like It Like That.

The group returned in 1996 with the album “Satisfy”. Both singles off the album had different versions and different lead vocals for each song. The first single “I Am Woman” was released originally with Valentine on lead vocals. But shortly after the single was released Valentine left the group. Lead vocals where then taken over by Gayle Ellis. On “I Need Your Lovin'” the album vocals where by Valentine and the single remix vocals where handled by Ellis and Escalera (who had then returned to the group from hiatis). Nicki Richards also recorded her lead vocals on some of the “Satisy” album tracks; notably “Whenever You Need Me” and “Keep On Giving Me Love”.

In 1997, Sabrina Nieves contributed the track “Supersonic” under the name Sabrina Sang on the Jock Jams Vol. 3 album.

In 2002 a remake of Sweet Sensation’s “Hooked On You” was recorded by Escalera for the album Freestyle Party. Promotional remixes of the song, also featuring Escalera where released by Fever Records. A planned dance single for the song “I’ll Stand By You” featuring Escalera, Lorraine Munoz and Sabrina Nieves was never released.

In November 2008, Evelyn Escalera released her first solo single, a cover of the Mariah Carey Christmas classic “All I Want for Christmas is You”, available on iTunes, under her new pseudonym Evelyn DeMille.

In 2010, Evelyn Escalera contributed the track “Grown Up Christmas List” to the “A Traditional Freestyle Christmas Vol 1” Album.

Michelle Valentine went on to become an author, writer, and novelist. Writing Nyagra’s Falls, A Girl’s Gotta Eat, and The Year it Snowed in April.

On November 7, 2015, the Cover Girls (Escalera, Munoz and Nieves) were featured in a documentary on freestyle music titled Legends of Freestyle. Interviewing all top freestyle artists and delving into the history and movement of this genre. The Documentary presented by Stanulis Productions premiered at the HBO Urban Action Film Festival at the AMC Theater; one night only on Sat Nov 7th 2015 on 47th Street in New York City.