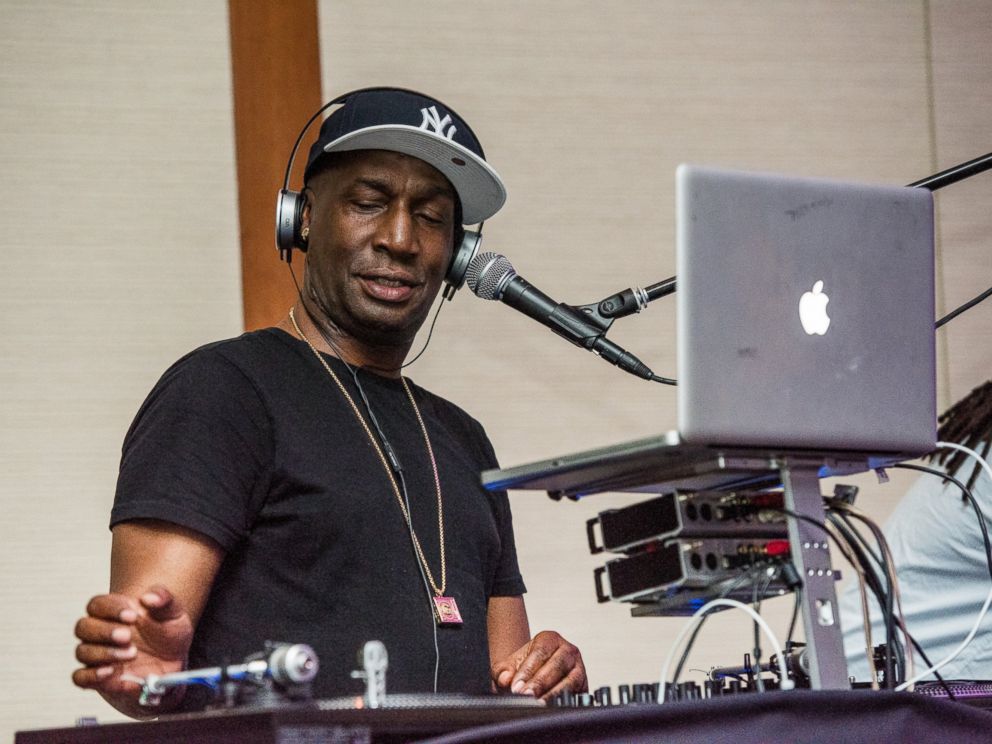 Grandmaster Flash is an American hip hop recording artist and DJ. He is considered to be one of the pioneers of hip-hop DJing, cutting, scratching and mixing. Grandmaster Flash and the Furious Five were inducted into the Rock and Roll Hall of Fame in 2007, becoming the first hip hop act to be honored.

Grandmaster Flash played parties and collaborated with rappers such as Kurtis Blow and Lovebug Starski. In the mid 1970s, he formed his own group. The original lineup consisted of Cowboy (Keith Wiggins), Melle Mel (Melvin Glover) and The Kidd Creole (AKA Kidd Creole/Nathaniel Glover), and the ensemble went by the name “Grandmaster Flash & the 3 MCs”. Cowboy created the term hip hop. He created the term while teasing a friend who had just joined the U.S. Army, by scat singing the words “hip/hop/hip/hop” in a way that mimicked the rhythmic cadence of soldiers marching. Cowboy later worked the “hip hop” cadence into a part of his stage performance. Mel was the first rapper to call himself “MC” (Master of Ceremony). Two other rappers briefly joined, but they were replaced more permanently by Rahiem (Guy Todd Williams, previously in the Funky Four) and Scorpio (Eddie Morris, a.k.a. Mr. Ness) to make Grandmaster Flash and the Furious Five. Quickly gaining recognition for their skillful raps, Grandmaster Flash and the Furious Five pioneered MCing and freestyle battles. Some of the staple phrases in MCing have their origins in the early shows and recordings of the group. In 1978, the new group began performing regularly at Disco Fever in the Bronx, one of the first times a hip-hop group was given a weekly gig at a well-known venue.

Grandmaster Flash and the Furious Five were signed to Bobby Robinson’s Enjoy Records and in 1979 released their first single, “Superrappin'”. The following year they signed to Sugar Hill Records and began touring and releasing numerous singles. The seminal “The Adventures of Grandmaster Flash on the Wheels of Steel”, released in 1981, is a 7-minute solo showcase of Grandmaster Flash’s virtuosic turntable skills, combining elements of Blondie’s “Rapture,” Michael Viner’s Incredible Bongo Band’s “Apache,” Queen’s “Another One Bites the Dust,” Chic’s “Good Times,” and the group’s own “Freedom.” It is also the first documented appearance of record scratching on a record. That year, the group opened for The Clash and were poorly received by an audience unaccustomed to the new style.

The group’s most significant hit was the electro rap song “The Message” (1982), which was produced by in-house Sugar Hill producer Clifton “Jiggs” Chase and featured session musician Duke Bootee. Unlike earlier rap tunes, “The Message” featured a grim narrative about inner city violence, drugs, and poverty. In 2002, its first year of archival, it was one of 50 recordings chosen by the Library of Congress to be added to the National Recording Registry, the first hip hop recording ever to receive this honor. Critics praised the song’s social awareness, calling the chorus “a slow chant seething with desperation and fury.” Other than Melle Mel, however, no members of the group actually appear in the song. Rahiem lip-synced Duke Bootee’s vocal in the music video. The same year, Grandmaster Flash appeared in the movie “Wild Style” and sued Sugar Hill over the non-payment of royalties. Tensions mounted as “The Message” gained in popularity, eventually leading to a rupture between Melle Mel and Grandmaster Flash. Soon the group disintegrated entirely. Grandmaster Flash, The Kidd Creole, and Rahiem left Sugar Hill, signed with Elektra Records, and continued on as simply “Grandmaster Flash”, while Melle Mel and the others continued on as “Grandmaster Melle Mel & the Furious Five”.

Although frequently credited on the records, Grandmaster Flash doesn’t actually appear on “The Message,” “Freedom,” or many of the other Furious Five songs.[6] Although Grandmaster Flash provided the central element of the group’s sound when performing live (in addition to giving the group its name), there was little room for his turntablism in early singles driven by the grooves of live session musicians. Grandmaster Flash and The Furious Five reformed in 1987 for a charity concert, and in 1988 they released a new album. The group reunited again in 1994, although Cowboy died in 1989.

He hosted a weekly show on Sirius Satellite Radio (Friday Night Fire with Grandmaster Flash) and was presented with the BET “I Am Hip Hop Icon” award in 2006.

Grandmaster Flash and the Furious Five were the first hip-hop/rap group inducted into the Rock & Roll Hall of Fame on March 12, 2007 by Jay-Z. In 2008, he remixed the single “Into the Galaxy” by the Australian group, Midnight Juggernauts.

Today, Grandmaster Flash is the owner of a clothing line, “G.Phyre.” In 2008 he released a memoir, The Adventures of Grandmaster Flash: My Life, My Beats. In the memoir, he talks about the origins of his fascination with scratching records and creating new beats. From a young age, Flash talks about how he would sneak into his father’s record room to watch the record player spin, and then get punished for touching the records. even with things not associated with music, flash found inspiration in. The spokes of his bicycle gave way to an interest in how record players create music by just turning the disc with grooves in it. Flash continued to grow in experimentation by taking apart any kind of technology he could to figure out how it worked. His early work shows how the innovative ways in which his artistic abilities developed into what is considered the first evolution of hip hop culture.