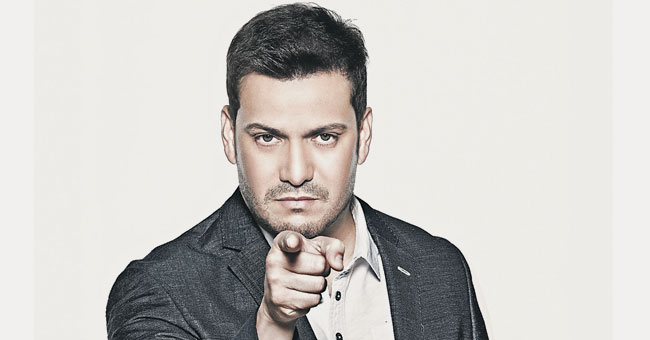 Víctor Manuelle is a successful Latin Grammy nominated Puerto Rican salsa singer, songwriter, and improvisational son singer, known to his fans as El Sonero de la Juventud (“The Singer Of Youths”). He is identified primarily with salsa romantica or “salsa monga”. Victor Manuel has neither recorded in English, nor made a Latin pop album, nor (with rare exceptions) ventured into acting, preferring to remain a musician grounded within salsa music. He has recently beat Marc Anthony for the most number-one singles in the Billboard Tropical Songs chart.

Victor Manuelle emerged as a leading voice among the generation of New York salsa performers who rose to prominence in the mid-’90s, along with Marc Anthony and India, who were his only rivals in terms of success and popularity. Mentored by Gilberto Santa Rosa and produced by Sergio George, Manuelle regularly topped the tropical charts during his mid-’90s peak, as his albums Victor Manuelle (1996) and A Pesar de Todo (1997) spun off a parade of number one hits. The esteemed sonero continued his hitmaking in the years that followed, as every single one of his studio albums in the successive decade spun off at least one tropical chart-topper of its own.

Víctor Manuelle has become one of the best-selling salsa performers of recent years, with his albums selling a combined 1 million-plus copies in the U.S. Three studio albums, 1999’s Inconfundible (“Unmistakable”), 2001’s Instinto Y Deseo (“Instinct and Desire”) and 2004’s Travesía (“Crossover”), have cracked Billboard’s overall Top 200 Albums chart, and the latter two reached #1 on the Latin Album chart (Inconfundible reached #2). Interestingly, while several of his singles have made the Top 5 or Top 10 on the Latin charts, he had to wait for 2004’s Tengo Ganas (“I’m in the Mood”) to score a Billboard #1 Latin hit.

Perhaps his moment of greatest visibility came when he, to the happy surprise of the attendees, sang an a cappella version of Celia Cruz’s signature song, La Vida Es Un Carnaval (“Life is a Carnival”), at her funeral at St. Patrick’s Cathedral in New York in July 2003. This scene was replayed numerous times in the ensuing days on Spanish-language television. A few months before, he had performed the song for Miss Cruz, with full orchestra, at a televised tribute concert for her, the last one at which she ever performed on stage.