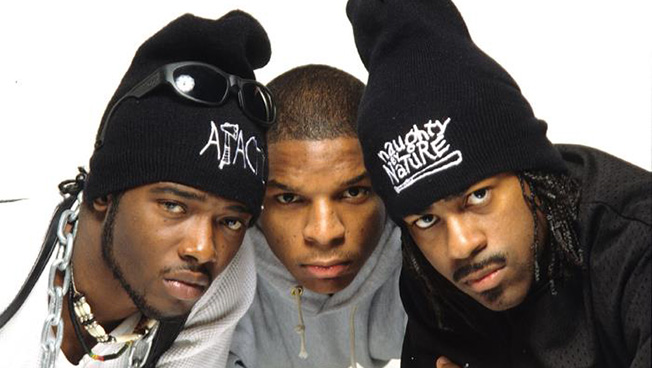 The group’s first hit as Naughty by Nature was a track called “O.P.P.,” which sampled the Jackson 5’s hit “ABC” and was released in 1991 on their self-titled album Naughty by Nature. The song peaked at #6 on the Billboard Hot 100, making it one of the most successful crossover songs in rap history. The song has become well known in pop culture, being mentioned in TV shows and films such as The Fresh Prince of Bel-Air, Malibu’s Most Wanted, My Wife and Kids, Monk, and The Office. “O.P.P.” also gained critical acclaim, being named one of the top 100 rap singles of all time in 1998 by The Source magazine, and being ranked the 20th best single of the 1990s by Spin magazine.

The album also generated another hit, a reworking of Bob Marley’s “No Woman No Cry” called “Everything’s Gonna Be All Right” (the track was also called “Ghetto Bastard” on some explicit releases). That song detailed the experiences of Treach growing up in poverty, and now rising up to live a better life. Powered by the success of that song and “O.P.P.”, their self-titled album went platinum.

Fellow New Jersey native Tony D, a respected and prominent producer, accused Naughty by Nature of stealing a sample from his breakbeat album Music Makes You Move and using it on their track “O.P.P.” The matter was settled out of court. Between albums, the group also scored a major hit with the track “Uptown Anthem”, from the soundtrack to the 1992 film Juice. Treach also got a cameo acting role in the film, his first acting role. Fellow rapper 2Pac also acted in the movie, and Treach would befriend him. This led to a long acting career for Treach and a long friendship with 2Pac. In 1993, the group starred in the superhero comedy film The Meteor Man, as a street gang. When 2Pac died in 1996, Treach made a tribute song to him, called “Mourn You Til I Join You.”

Later, the group had multiple hits from its third and fourth albums, called 19 Naughty III and Poverty’s Paradise respectively. Both albums reached the #1 spot on the R&B/Hip-Hop Charts. “Hip Hop Hooray” was a success from the album 19 Naughty III. Its video was directed by Spike Lee and featured other hip-hop artists popular in the early 1990s, including Queen Latifah, Eazy-E, Run-D.M.C., and Da Youngstas. Poverty’s Paradise won the Grammy Award in 1996 for Best Rap Album, becoming the first album to win this award.[7] It also spawned a hit song in “Feel Me Flow” which peaked at #17 on the Billboard Hot 100.

In the mid-1990s Naughty by Nature started their own music imprint, Illtown Records, and in 1995 released an album from their protégés the Rottin Razkals. The group (mainly Kay Gee) worked closely with a number of R&B groups over the next few years particularly Zhane and Next. Kay Gee produced Next’s “Too Close”, which became a #1 hit in 1998.

In 1999 the group released its fifth album, titled Nineteen Naughty Nine: Nature’s Fury. The album was fairly successful, being certified Gold by the RIAA, and spawned the hit “Jamboree” that peaked at #10 on the Billboard Hot 100.