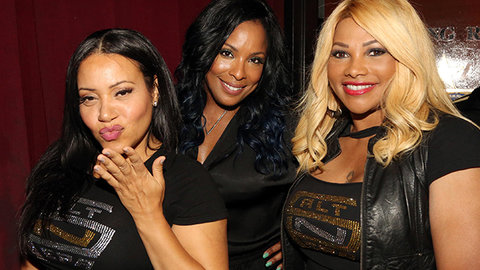 Salt-N-Pepa is an American hip-hop/rap trio from New York City, New York. The group, consisting of Cheryl James (“Salt”), Sandra Denton (“Pepa”) and originally Latoya Hanson (also known as Latoya Pamela Greene, who was replaced in 1987 by Deidra Roper (“DJ Spinderella”), was formed in 1985 and was one of the first all-female rap groups. The group won the 1995 Grammy Award for Best Rap Performance by a Duo or Group.

In mid–1985, Brooklyn–native Cheryl James met Queens–native Jamaican rapper Sandra Denton, both studying nursing at Queensborough Community College. The pair became close friends and co–workers at Sears. Another co-worker Hurby “Luv Bug” Azor was studying record production at the Center of Media Arts and asked James and Denton to record for him as a class project. This resulted in the single “The Showstoppa”, an answer record to Doug E. Fresh’s hit single “The Show” by the duo who originally calling themselves “Super Nature” along with DJ Latoya Hanson in late–1985. Produced by Azor, The single utilized a melody from the 1984 film Revenge of the Nerds. The finished recording garnered some airplay on a New York City rap radio program. The independent Pop Art Records gave it an official release, and “The Showstopper” became a modest R&B hit. The single reached No. 46 on the Billboard R&B chart. In September 1985, The group signed to Next Plateau Records, adopted the stage name Salt ‘N’ Pepa and later released their debut album “Hot, Cool and Vicious” in December of 1986.

In 1987, the group recruited Deidra Roper, a 15-year old high-school student-DJ named “Spinderella” after the departure of Hanson. The group entered the music industry at a time when hip-hop music was believed to be a fad and major record companies were reluctant to sign hip hop artists. Many early hip hop artists recorded for independent labels. Salt-N-Pepa made their impact on hip-hop by being one of the first all-female rap groups. With lots of concerns about sexist lyrics and video clips that objectified women’s bodies in hip hop music, many feminists disliked rap and hip-hop music because of its bad portrayal of women. However, Salt-N-Pepa changed the look of hip hop. They were scantily clad in sexy clothing and were not afraid to talk about sex and their thoughts about men. Their song “Let’s Talk About Sex” was a huge hit.