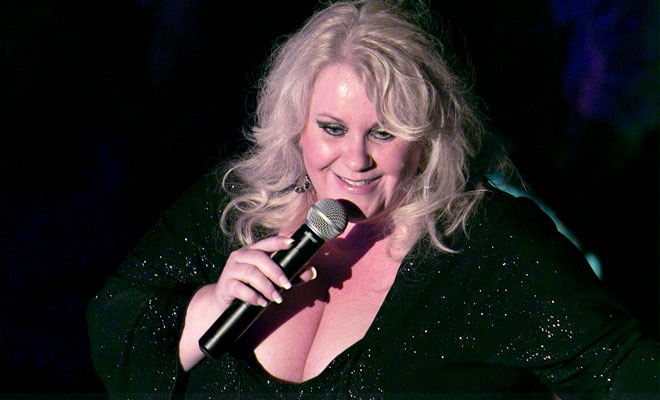 France Joli (born February 2, 1963) is a Canadian singer, best known for the disco classic “Come to Me.” As early as age four, Joli was performing for relatives lip-synching to Barbra Streisand records while handling a skipping rope like a microphone; she had appeared on television by age six. At age 11, Joli left the public school system (her mother tutored her) to concentrate on her performing career appearing regularly in television commercials and talent shows. A mutual acquaintance suggested Joli meet up with musician Tony Green who Joli approached backstage after he’d given a concert, Joli inviting Green to be her record producer. Green didn’t take the 13-year-old Joli seriously: he’d recall: “To get rid of her I [told] her to keep in touch.” According to one source Joli eventually visited Green’s home to sing for him; it’s also reported that Green first heard Joli sing from the audience of an “end of school year show” in which she performed in the fall of 1978. Both accounts concur that Green first heard Joli singing along with a Streisand record. Green had written the song “Come to Me” for Joli by the next day.

When the producer Green originally commissioned to record Joli indicated a desire to develop Joli as a Francophone singer, Green himself took over production duties for Joli. The tracks Joli cut with Green were picked up by Prelude and released on April 17, 1979 as the album France Joli: the track “Come to Me” received a boost when Joli performed it as a last-minute replacement for Donna Summer at a concert held on Fire Island on July 7, 1979 before an estimated audience of five thousand.

In 1996, Joli reunited with Tony Green for the single Touch on Popular Records. The original incarnation of the single was a CD single with Eurodance/Hi-NRG styled remixes intended for radio but received limited airplay. The song belatedly became a hit in clubs, reaching #24 on Hot Dance Music/Club Play, when new remixes by Darrin “Spike” Friedman were released on vinyl 12″ single. There were two separate 12″ singles released individually, each featuring a different Darrin Friedman remix, along with the other mixes from the CD single divided between the two records. The song became a regional hit in the New York tri-state area, as it was a favorite of DJs such as Jonathan Peters and Junior Vasquez at their weekly residencies.