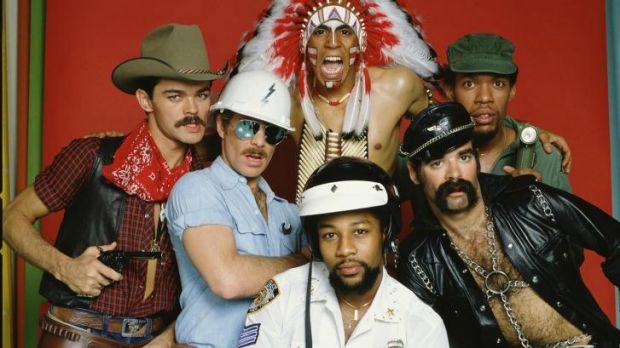 Village People is an American disco group well known for their on-stage costumes depicting American masculine cultural stereotypes as well as their catchy tunes and suggestive lyrics. Originally created by Jacques Morali and Henri Belolo to target disco’s gay audience by featuring popular gay fantasy personae,[1] the band quickly became popular and moved into the mainstream. The group scored several disco and dance hits internationally, including three hits in the US, “Macho Man”, “In the Navy”, and their biggest hit, “Y.M.C.A.”.

The group was the creation of Jacques Morali, a French musical composer. He had written a few dance tunes when he was given a demo tape recorded by singer/actor Victor Willis. Morali approached Willis and told him, “I had a dream that you sang lead on my album and it went very, very big”. Willis agreed to sing on the eponymous debut album, Village People.

It became a hit, and demand for live appearances soon followed. Under the collaboration Can’t Stop Productions, Morali and his business partner Henri Belolo hastily built a group of dancers around Willis to perform in clubs and on Dick Clark’s American Bandstand. The band’s name refers to New York City’s Greenwich Village, at the time known for its large gay population. Morali and Belolo created a group of stereotypes based on the fantasy attire often worn by gay men of Greenwich Village when socializing. As the Village People’s popularity grew, Morali, Belolo, and Willis saw the need for a permanent “group”. They took out an ad in a music trade magazine which read: “Macho Types Wanted: Must Dance And Have A Moustache.”

Morali met the first recruit, Felipe Rose (who dressed as a Native American), on the streets of Greenwich Village. Rose was a bartender who wore jingle bells on his boots, and was invited to take part in the sessions for the first album. Alex Briley (who started portraying an athlete but eventually took on the soldier persona) was hand-picked by Willis to be in the group. The others were Mark Mussler (construction worker), Dave Forrest (cowboy), Lee Mouton (leatherman), and Peter Whitehead (one of the group’s early songwriters), who appeared on American Bandstand and in the video for the group’s first hit, “San Francisco (You Got Me)”. Later replacements were Glenn Hughes (leatherman), David Hodo (construction worker) and Randy Jones (cowboy).[2] Willis himself portrayed a police officer.

Songwriters Phil Hurtt and Peter Whitehead were brought in to write lyrics for the first group album. Willis took over writing duties for the group’s biggest albums (Macho Man, Cruisin’ and Go West), scoring their biggest hits, including “Y.M.C.A.”, “Macho Man”, “Go West”, and “In the Navy”. He also wrote for other Can’t Stop Productions acts, such as The Ritchie Family and Patrick Juvet.[4] Gypsy Lane (Village People band), and their conductor Horace Ott provided much of the musical arrangements for Morali, who did not play any instruments.

In 1979, the United States Navy considered using “In the Navy” in a television and radio recruiting campaign. Belolo offered them permission if the Navy would help film a music video for it. The Navy provided them access to the San Diego Navy base, where the USS Reasoner (FF-1063), several aircraft, and the crew of the ship would be used. This song was also performed on the TV series The Love Boat, and in the 1995 Navy comedy movie Down Periscope.

The group’s fame peaked in 1979, when they made several appearances on The Merv Griffin Show and traveled with Bob Hope to entertain U.S. troops. They were also featured on the cover of Rolling Stone, Vol. 289, April 19, 1979. Willis left the group at the end of an international tour in 1979 and was replaced by Ray Simpson, the brother of Valerie Simpson (of Ashford & Simpson).

Victor Willis rejoined the group briefly in late 1981 for the album Fox on the Box, which was released in 1982 in Europe and Japan, and in 1983 in the United States under the title In the Street. Ray Simpson left the group in 1983 and was replaced by Miles Jaye. Jaye contributed an extra track to In the Street and performed numerous live shows and television appearances. Mark Lee replaced David Hodo in 1982.

Their last album containing new material, the 1985 dance/Hi-NRG release Sex Over the Phone, was not a huge commercial success, but it fared better in sales and club play than Renaissance. The title track, when released as a single, was banned by the BBC because of its subject matter: credit-card phone sex. The album featured yet another new lead singer, Ray Stephens (of The Great Space Coaster fame). Py Douglas came in to sub for Stephens for some of the group’s live appearances in 1985.